This blog is hosted on Ideas on Europe

This blog entry is a follow-up to the research agenda published last month. It presents further details of the research project. It captures the evolving complexity of the research project since the most recent reflections on Bourdieusian influences in the EU studies have encouraged embracing not just one of the overall three taxonomies of science diplomacy, but two of them. More importantly, this blog entry further clarifies the conceptual modalities via a display of two schematic visualisations of the overall theoretical model and interrelations of the selected components.

In general, science diplomacy comprises three taxonomies: diplomacy for science, science for diplomacy and diplomacy in science. First selected taxonomy ‘diplomacy for science’ for the research project “is mainly about the facilitation of international scientific collaboration. Here, classical tools of diplomacy are put in use to support the scientific and technological community. It is about using diplomacy to establish cooperation agreements at the government and institutional level. The goal of diplomacy for science actions is to benefit from foreign science and technology capacity to improve the national capacity.” (Berton et al., 2016, p. 27) In line with one of the three suggestions made by Luk Van Langenhove, this research project examines the EU “science and technology contributions towards enhancing regional security in its neighbourhood” (Berton et al., 2016, p. 29). Namely, as it was argued in the first outline of the research project (Šime, 2019), in the EU Southern Neighbourhood it is pursued via efforts directed towards stabilising an area affected by volatilities.

Earlier it has been identified that the key documents governing the overall EU Southern Neighbourhood Policy do not explicitly prioritise cooperation in higher education, research, science and innovation as the key defining thematic strands (Šime, 2019). Thus, the research project is presented with full acknowledgement that the examined phenomenon is implicit science diplomacy – collaborative ties which correspond to the selected taxonomy of science diplomacy but are not defined as such by the policy-makers and are not positioned in the key policy documents as having a pivotal role. However, as elaborated earlier (Šime, 2019), such positioning does not mean that cooperative ties in higher education, research, science and innovation have a limited role in contributing to the overall goals of the EU vis-à-vis its southern neighbours. One of the leading EU science diplomacy thinkers – Luk Van Langenhove – concisely describes this less visible but no less important role of scientists and researchers in shaping the international ties or being encouraged to engage in collaborations with their foreign colleagues to attract more minds to “the EU’s own scientific world” (Berton et al., 2016, p. 29):

“First, it is often said that the ‘invisible colleges’ of scientists across state-borders can contribute to building trust between nations or cultures. Secondly, it is also argued that the language of science can contribute to pointing to technical solutions for political problems. One can thus distinguish between science and technology relations that occur without government intervention and science diplomacy when governmental officials try to shape and stimulate relations to advance national interests.” (Berton et al., 2016, p. 27)

This quote guides to the second selected taxonomy ‘science for diplomacy’ which is understood as “science used as a tool to build and improve relations between states” (Van Langenhove, 2017, p. 8). These are good basic conceptual grounds for an examination of the EU relations with Southern Neighbourhood due to the interdependence factor which Luk Van Langenhove raises when explaining this particular taxonomy of science diplomacy in certain situations “where there are tensions in relations between certain states or when states are faced with common problems that they cannot solve on their own” (Van Langenhove, 2017, p. 8). This taxonomy was neglected in the initial scoping of the theoretical framework of the research project (Šime, 2019). However, while dwelling in more detail in the classical works of Pierre Bourdieu and its inspired more recent scholarly reflections on the evolving diplomatic practices in the EU setting, it became clear that the empirical examination of the field via interviews with EU funded project managers based in the EU mirrors this dimension of science diplomacy.

Graph no. 1: Hierarchical Relations of Science Diplomacy Inspired by the Practice Theory 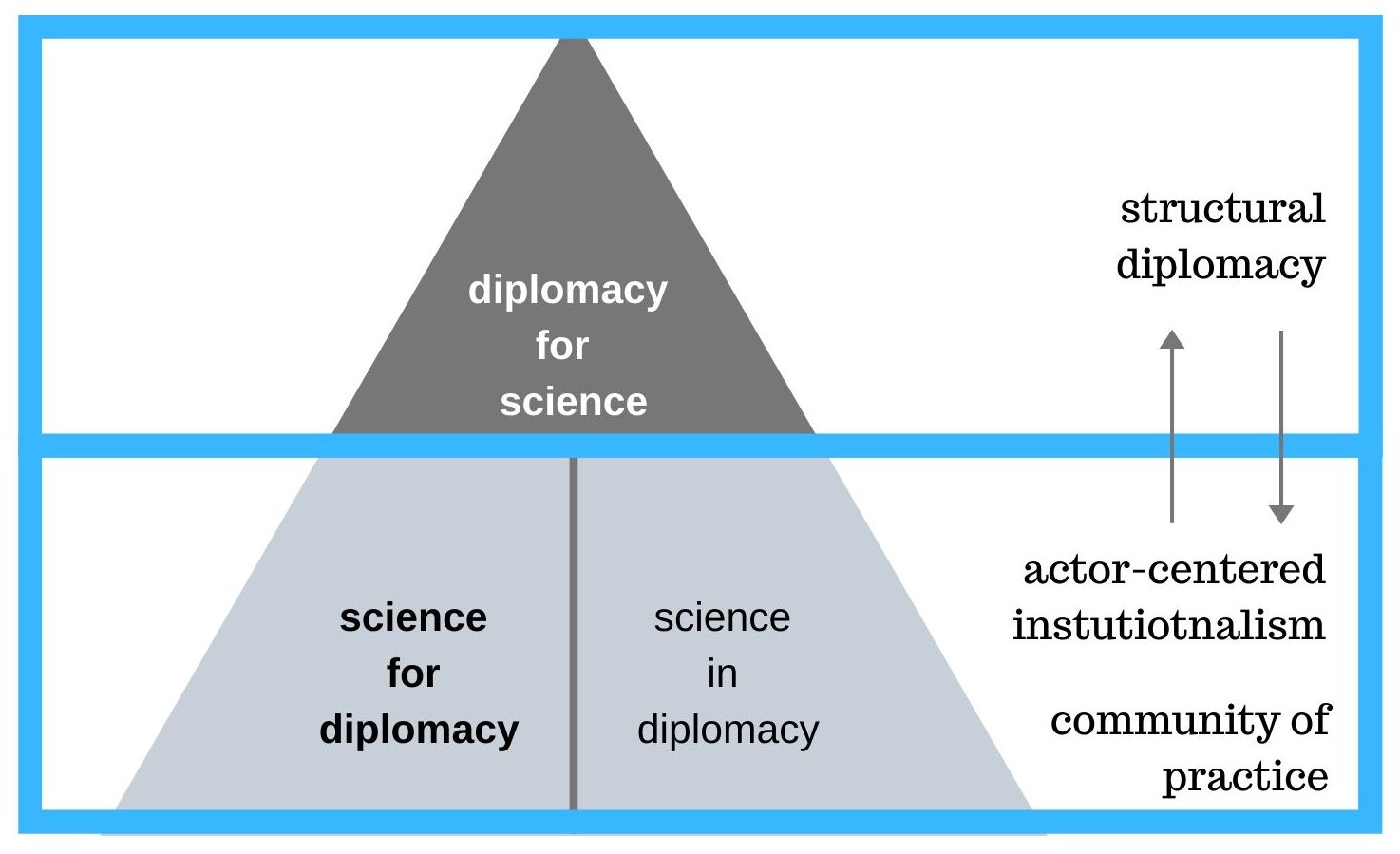 ‘Diplomacy for science’ is the upper hierarchical dimension which is defined and its policies maintained by the selected EU institutions – European External Action Service (EEAS) responsible for the EU Global Strategy, Directorate-General for Research and Innovation (DG RTD) steering the EU Framework Programme “Horizon 2020”, Directorate-General for Education and Culture (DG EAC) responsible for the Erasmus+ Programme, Directorate-General for Neighbourhood and Enlargement Negotiations (DG NEAR), former DG ELARG (until the end of 2014) (Schumacher et al., 2017, p. 129),  managing the EU-Morocco (MA) and EU-Tunisia (TN) Annual Action Programmes as integral parts of the European Neighbourhood Instrument 2014-2017 (Šime, 2019). One of the reasons for such a comprehensive approach in the selection of the EU instruments for further examination is the absence of a clear-cut definition of what science diplomacy is. Earlier approximations of science diplomacy entail “support to academic exchange, networking and international cooperation, the exploitation of scientific networks for non-research purposes, the provision of scientific advice to foreign policy, etc.” (Rungius, 2018, p. 3). Since all of the identified institutions offer support for activities which can have a direct influence on the shaping and development of science, all of them are treated as relevant to a broad understanding of the implicit science diplomacy dynamics.

‘Science for diplomacy’ is embodied by the EU-based project managers who following the EU guidance and funding regulations are responsible for a successful implementation of the projects. ‘Science in diplomacy’ as the third taxonomy of science diplomacy is displayed in graph no. 1 without a bold outline because it is not covered by the research project. ‘Science in diplomacy’ stands for the use of “scientific knowledge in foreign policy decisions. The goal is to improve foreign policy actions through the use of scientific knowledge.” (Van Langenhove, 2017, p. 8) This taxonomy has a more pronounced relation to the science advisory services, which is a whole field subject to the intricacies of the multi-level governance system (Adler-Nissen, 2014, p. 179). Since the research project is not aimed at examining EU science advisory systems and whether or in what form the EU funded projects serve as sources of science advice for EU policies, the theoretical scope is limited to a two-dimensional approach to science diplomacy analysis focusing solely on the ‘diplomacy of science’ and ‘science for diplomacy’ taxonomies.

Overall, a study dedicated to the EU’s evolving science diplomacy is a fresh perspective looking beyond the EU’s unfolding novel diplomatic practices focused on the intergovernmental dynamics captured by Adler-Nissen’s ‘late sovereign diplomacy’ – “the intense integration of national representatives who adhere to an ever closer union, producing legislation that challenges the sovereignty of their own nations” (Adler-Nissen, 2014, p. 175). Likewise, the research project bears in mind but is not preoccupied with the EU intergovernmental dynamics of certain countries aiming at using “the EU as a power multiplier” and “a clear vehicle for uploading national interests” (Spence et al., 2015, p. 261)  such as the acclaimed decades’ long Spain’s foreign policy aspirations (Bremberg, 2010a, p. 132) to promote a “shared Mediterranean sensibility” and country’s efforts to upload the Southern Neighbourhood-related matters to the supranational (EU) level (Schumacher, Bouris, & Olszewska, 2016, pp. 266-267). Instead, the research project is tailored to offer more room for examination of the role of higher education and science cooperation managers as a component shaping the overall EU’s external relations in an intermestic setting.

Reproduction of a certain repertoire stemming from the basic conditions shaped by the expert-level project-driven science and higher education domain as a habitus (Bigo, 2011, p. 242) is placed in the limelight. The ‘regulated improvisations’ (Bigo, 2011, p. 242) facilitated by the higher education and research-oriented projects and project Coordinators and Lead Partners as their most informed witnesses hold a potential to show the formal or substantial role science plays in reaching the EU’s overarching goals towards the EU Southern Neighbourhood.  Bourdieu’s logic is as follows: “Official relationships which do not receive continuous maintenance tend to become what they are for genealogist: theoretical relationships, like abandoned roads on an old map.” (Bourdieu, 1977, p. 38, 1990, p. 35) Slightly paraphrasing, the research project is aimed at dissecting whether the engagement of MA&TN institutions in the EU funded projects results in ad-hoc or fragmented formal interactions resembling Bourdieu’s “theoretical relationships” or these projects spark “continuous maintenance” and substantial improvement of higher education and science potential in both selected countries.

Graph no. 2: The patterns of (potential) interaction 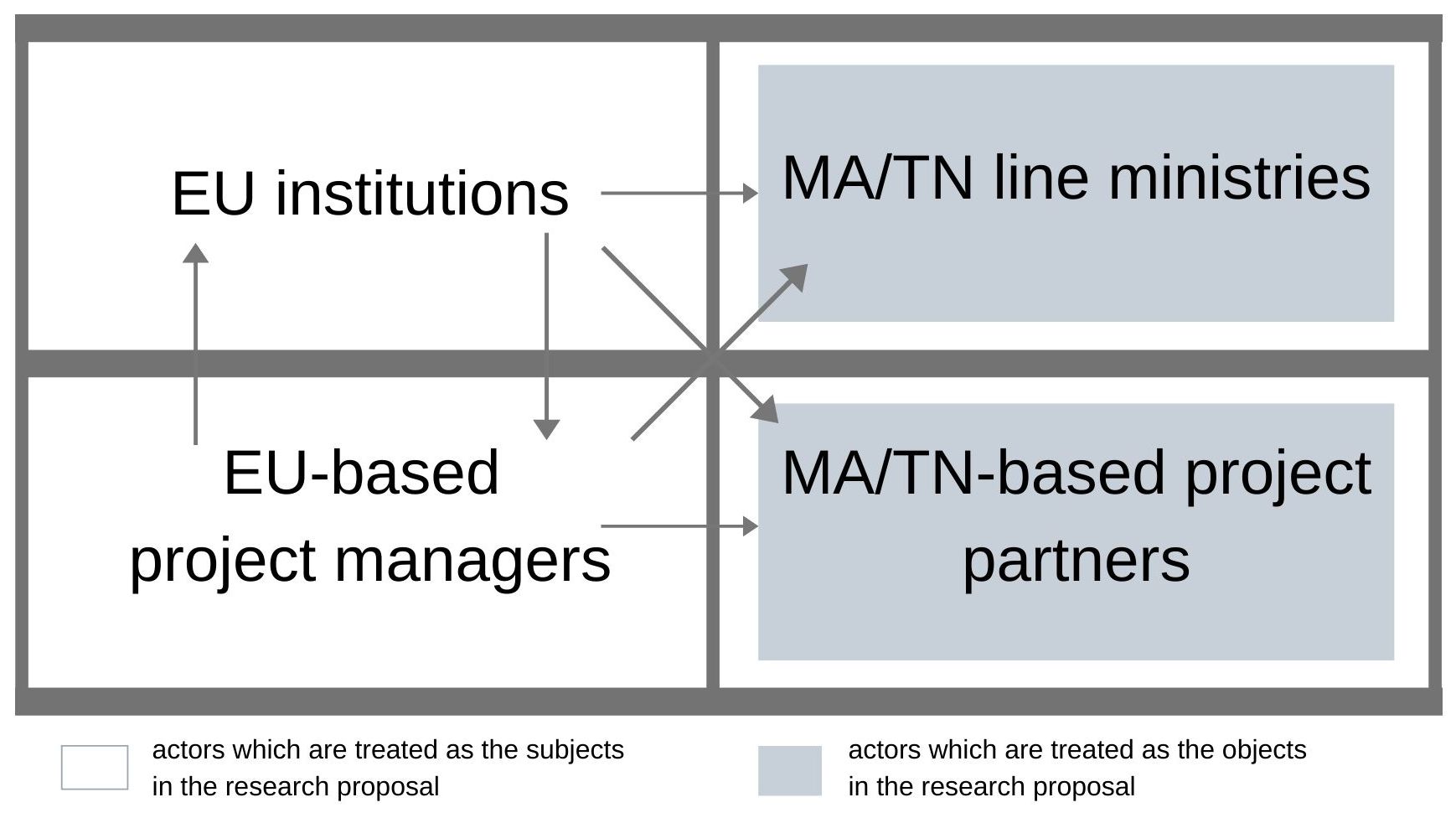 The theoretical underpinnings elaborated in the earlier sections and remarks on the EU focus published earlier (Šime, 2019), clarify that the research project is crafted to explore the EU framework positions, offered tools and cooperation opportunities to institutions in two selected Southern Neighbourhood countries. In such a manner the EU institutions and EU actors – represented by the Lead Partners or Coordinators of the projects funded by one of the earlier indicated EU programmes – are viewed as the objects offering insight into the subjects (graph no. 2) which shape the overall landscape of the science and higher education domains in the EU Southern Neighbourhood in general and two selected countries in particular.

The author of the research project does not ignore that there might be a multiplicity of additional interaction patterns. Such awareness is mirrored in the diversity of communication arrows indicated in graph no. 2. Likewise, the research project is crafted keeping at the back of the author’s mind the other consultative processes which potentially bear an imprint on those interactions which are selected for a more scrutinised analysis in the scope of the research project. Among such influencing factors might be the dominating perspective of the EU Member States, especially the so-called ‘patron’ Member States (Schumacher et al., 2017, pp. 119, 125) with a keen interest in shaping the EU’s approach adopted towards the EU Southern Neighbourhood. Instead, it primarily explores the key policies and their supporting funding measures EU institutions have established to structure their relations with the MA and/or TN in particular or the EU Southern Neighbourhood as a whole. Furthermore, the assessment of the EU project Lead Partners and Coordinators about their cooperation with the MA and/or TN institutions are prioritised to acquire an expert-level assessment what benefits do the European higher education and research initiatives provide to the capacity building and internationalisation efforts of the MA&TN higher education and research institutions. Overall, the arrows directed horizontally from EU side towards the MA&TN side describe the prevailing perspective and selected interactions to be examined during the research project to find out how content-rich or formally plain is the EU science diplomacy in the Southern Neighbourhood.

All in all, this blog entry is not a comprehensive update on the overall earlier outlined research project. Instead, it offers further nuances about one theoretical strand – science diplomacy. It is prepared to place so-to-say more meat on one sector of the bones in a manner which renders the latest thinking on the EU science diplomacy easily accessible to all interested thinkers.

Šime, Z. (2019). The EU’s Diplomacy for Science in the Southern Neighbourhood: Setting a Research Agenda. Retrieved October 16, 2019, from https://europeangovernance.ideasoneurope.eu/2019/10/15/the-eus-diplomacy-for-science-in-the-southern-neighbourhood-setting-a-research-agenda/

Zane Šime is a member of the Association of Polar Early Career Scientists. She writes in her personal capacity.

This work is licensed under a Creative Commons Attribution-NonCommercial-ShareAlike 4.0 International License.

UACES and Ideas on Europe do not take responsibility for opinions expressed in articles on blogs hosted on Ideas on Europe. All opinions are those of the contributing authors.